On the first day of the first ever Masters in Applied Positive Psychology program, Chris Peterson suggested that a key to positive psychology can be found in these three words: “Other people matter.”  Here is a case in point.  My comments follow.

A true “love story” from Paragon Mills
She sat in the hallway with her invitation in her hand and tears running down her face. She should have been happy. In her hand was an invitation to the Valentine Breakfast for Dads and Daughters.

“What’s wrong?” I asked. “I can’t go,” she said with her head lowered. Growing up without a daddy myself, I quickly offered hope. I explained to her that she didn’t have to bring a dad. She could bring a grandfather, an uncle, cousin, friend, any special boy in her life. Head still lowered, she softly sighed, “I still can’t go. I don’t have any boys in my life. It’s just me and my mom.”

My heart ached for this little girl. She had never known a daddy’s love or a grandfather’s. She had never had a guy make her feel special. Here it was Valentine’s Day, and she was excluded because of a life without a father figure. I was nearly overcome with emotion as well. I lifted her chin, looked into her eyes, and said, “You come to our Valentine Breakfast and there will be a date waiting for you!” The corner of her mouth lifted into a smile and she threw her arms around me. I dried her tears. She proudly filled out her RSVP to the Valentine Breakfast and marked it for two and went back to class.

Okay, I thought: Note to self – find a date for Carol for the Valentine Breakfast. When I got back to the office, I had two messages from teachers. I have a girl in my class that really wants to go to the Breakfast, but she has no guy in her life. Note to self again: I need three dates. I asked our guy teachers if they would fill in as a proxy for our daughters without dads. They were happy to do so. But by the end of the day, I had several daughters and no dads. I had run out of male teachers. 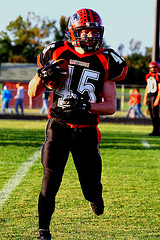 I needed a solution. I needed several guys. I did not want these little girls, ages 5 to 10, to be excluded from a Valentine Breakfast because they lacked the presence of a special guy. Then I had this crazy idea. What if I could get a football team of guys to come to our school? What a cool thing for little girls to be escorted by guys who were football players! My daughters are Burros – they attend Hillsboro High. I had been to plenty of football games and thought of a special team.

I called Mr. Bob Lawson at Hillsboro High School. He was more than willing to meet our needs. He was ready to respond with the entire team, suited in their football jerseys. In just a day’s notice, he had a team of guys ready for action. 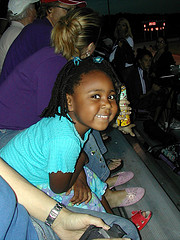 I wish you could have seen these guys with those little girls. Some of the guys were fixing the drinks and plates for the girls. Others were sitting and making conversation with the girls, making them feel special. Many of the girls were walked to their classroom by their football escort after the breakfast. And all the little girls who came to the Valentine Breakfast alone – well, they had their “prom” picture taken with a Burro by their side. Some girls had two! And those Hillsboro boys treated our little girls as if they were a princess for a day. In fact, our little girls were princesses.

Thanks, Mr. Lawson. Thanks, Hillsboro football team. You may not have won the state football tournament this year. But you did win the hearts of lots of little girls that will never forget their Burro date. That’s bigger. What you did today was impact a little life!

I have no doubt that everyone involved in this story — the young girls at Paragon Mills, the football players from Hillsboro, and all those who witnessed the event — performed better for it.    The students learned better.  They were more engaged with the work they were offered.  The teachers taught better.  Everyone was uplifted.

I trust you found this as uplifiting as I did.  Positive psychology says that the positive feelings you experienced reading this are important.  They make you better able to express your strengths of character and action, and those expressions will uplift others, who will likewise deliver great things, and so the upward spiral begins.  Keep it going!  Act on what you feel!  Send a note to the school’s principal, Mary Lou DelRio, marylou.delrio@mnps.org, and tell her what this story meant to you.  I’m sure she’ll forward it to Ms. Holland!

Flourishing with the Positive

From Ashes to Beauty

Dave: I’ll admit it, I got a little teary-eyed reading this story. Being the father of two teenaged daughters, I am a sucker for these kinds of stories. I have always been amazed at how big the impact can be when people do even the smallest things for another. Many times the “doers” have no idea how important their little acts can be in the lives of the receivers. Thanks for sharing this wonderful story and I will send a note to Mary Lou DelRio.
All the best, Doug

Dave, thanks so much for this story. I am writing my capstone on Dads and Daughters, so this was particularly heartwarming and meaningful to me because of the type of event featured. Hooray for the football team for coming and being heros! Aren

Thanks Sherri, you totally rock and I am glad to be part of this adventure!

In part because I am a political lefty, I believe in the public school system. I don’t believe that research based teaching strategies are a bad idea, not at all, but they do tend to foster Play It Safe Teaching or CYA Teaching. I seems like teachers often use research strategies thinking: “If I can get a journal or somebody with a PhD to back me up, well then I’ll use that research based method” and that can stifle creative Tweaking. That’s a real weakness but I still prefer using research based strategies over the traditional spray and pray approach to curriculum coverage. “Let’s march our bums through the textbook and hope something sticks.”

Cooperative learning works. Experiential education like you mentioned works. I don’t think the answer should be foisted upon the private sector and I do think paying public school teachers a professional wage is one key to making the enterprise move forward. In wealthier districts in Maine (primarily coastal districts with lots of wealthy lobstermen) there are public schools that rival any private school. One such is a philosophical adherent to discovery learning. Kids build hybrid cars and solar panels, do interpretive dance and have a par none vocational education for high paying and presumably satisfying careers. These are the most plugged in students I have heard or read about.

So yes, changing freebie stuff like our methods and philosophy are vital, but let’s be realistic. What other profession can we underfund and expect miraculous results? Healthcare? We are seeing what some extreme “cost effectiveness” is doing to THAT field and it is not pretty overall. Our troops? These people are suffering even after they come back from war because the dollars and the methods aren’t working well enough there. To paraphrase George Carlin, we have a country where you can buy edible underwear and sneakers with lights in them. Can’t we shell out an extra 100 or 1000 dollars per year for our future generations? I’d vote for that and I’m practically dirt poor. Why won’t our more privileged citizens?

Finally, doesn’t PP supplement P as usual? Lets fix what is wrong AND promote student flourishing. That seems more balanced and appropriate for nurturing our nation’s future.
We shouldn’t give up the progress made by PP’s forefathers and foremothers in any field, just stand on their shoulders and move forward.