Grandma Had It Right! Positive Psychology And Common Folk Wisdom 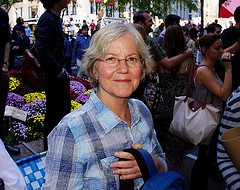 We’ve all heard the sayings: “A penny saved is a penny earned.” “Early to bed, early to rise, makes a man healthy, wealthy and wise.” “Don’t count your chickens before they hatch.” “An apple a day keeps the doctor away.”

But how accurate and helpful are these sayings, anyway? I started to wonder about this as I heard myself saying certain well-known catch phrases to myself, clients and my children as I became immersed in the world of Positive Psychology at the Penn MAPP program two years ago. Reading the research and books by Barry Schwartz, Jon Haidt, Marty Seligman, Chris Peterson and others made these phrases pop into my head more often, and made me realize that these “truisms” are probably more true than we could have ever imagined.

My unscientific finding, as I continue to delve into the world of well-being and quality of life research, is that there are countless phrases that I heard from my grandmother and other wise people throughout my life that are now backed up with relevant research. Consequently, I feel much more confident about using them with others and even believing in them myself. With coaching clients, they can also be terrific heuristics that give them a shortcut to remember what we talk about in our weekly calls, and that allow them to back up behavior and assignments with scientific evidence.

Here are a few of my favorites that I often rely on to make my point:

No pain, no gain. In a podcast interview I did with Dr. Jessica Tracy this summer, she mentioned how her research on authentic self-esteem seems to show that we build treasure troves of well-being and self-confidence when we take on hard challenges that remove us from our comfort zone.The same has been shown repeatedly in studies of goal-setting, especially around performance goals. Dr. Gary Latham, co-founder of “goal-setting theory” with Dr. Edwin Locke, says that “challenging and specific” goals trump “no goals or low goals” when someone is looking to build self-efficacy and happiness.

Birds of a feather flock together. In ground-breaking research on obesity, Dr. Nicholas Christakis of Harvard Medical School found this year that the biggest predictor of obesity is who is in your social network. Therefore, if you spend significant time, or value the presence and friendship, of someone who is obese or overweight, you significantly increase your own chances of being overweight. In another study, it was found that one twenty-minute phone conversation with a depressed college student had the ability to make the neutral person depressed, as well.

Laugh and the world laughs with you; cry and you cry alone. Extroverts trump introverts every time on happiness measures, partly because they are able to distract themselves through social encounters from their own troubles. Sonja Lyubomirsky and other researchers have also found that rumination done at home and alone magnifies one’s misery, while a distraction of eight minutes – preferably with upbeat social encounters – can snap a person out of depressive thinking.

A stitch in time saves nine. Studies of procrastination have found that people who fail to get things done on time tend to lose vast amounts of productivity, earning power and well-being because of the anxiety produced by trying to catch up later. New research out of Canada this year found that the current generation of students reports higher levels of procrastination than ever, partly because of the endless number of technological distractions such as email, text messaging and instant messages. Some see a causal relationship between the distractions and procrastination and the large number of depressed and anxious college students flooding mental health clinics.

The early bird gets the worm. Dr. Roy Baumeister, an expert in self-regulation, says that those who awaken early and have a “mastery” experience tend to have more productive days than those who wake up late and try to accomplish their goals later. The same has been found among “Prime Movers” in Dr. Edwin Locke’s book about the traits of great wealth creators. And because our natural biological rhythms favor action in the morning because of the body’s spike in testosterone early in the day (and that’s why To-Do lists are usually written early in the day).

It is more blessed to give than it is to receive. A recent study of macaque monkeys in Gibralter found that the more macaque monkeys a female groomed, the less stress hormones were found in her feces. Similarly, a study of men in Michigan found that those who volunteered were 2 1/2 times more likely to outlive their peers when they spent time volunteering, whereas those who were the recipients of these efforts didn’t show any changes in mortality.

Out of sight, out of mind. Who can forget Walter Mischel’s brilliant studies of children who were able to withstand eating a sweet treat, in the hopes that they would get another treat if they demonstrated self-control for a few minutes? He found that the most successful technique used by far by these children to avoid devouring the doughnut was to turn their back on the treat.

A ship in port is safe, but that’s not what ships are built for. The studies of risk-taking have found that people tend to regret the risks that they take and that don’t work out in the short-term, but that long-term they regret MORE the risks that they did not take. Studies of depression have also found that two of the most successful techniques for shaking bad moods, but that are among the least utilized, are risk-taking and volunteer work.

Confession is good for the soul. Studies by James Pennebaker and Laura King have repeatedly found that self-disclosure – at least for two-thirds of us — has enormous physical and emotional benefits. Confessional self-disclosure, when it is not forced and is not done to a judgmental person, has been found to boost the immune system, increase production of antibodies, and enhance the body’s response to vaccination.

All work and no play makes Jack a dull boy. Study after study underscores the dangers of overwork, with only one exception; people who say that their job is their primary joy report that work exhilarates them. But for most people, too much work reduces reaction time under stress, happiness and cuts into social time, which has been found to boost happiness. Too much work has also been found to reduce time spent in absorbing hobbies, which allow us to regnerate, rest and boost our zest factor.

Do you have other proverbs or folk wisdom that you can back up with research on well-being? If so, please use the comments section to add to this thread and give renewed life to the words of our wisest elders!

Latham, G. & Locke, E. A. (2006). Enhancing the Benefits and Overcoming the Pitfalls of Goal Setting. Elsevier. [An article from: Organizational Dynamics]

Very nice article, Caroline! Fun and different, it summarizes a lot of interesting research and gets off the beaten path! Thank you for a refreshing change!
MarieJ (MAPP.2)

Caroline!
I love this article. I’ve been looking forward to this article for ages, ever since you said you were going to write it!
It’s so fulfilling to have research behind the folk wisdom. Thank you,
S.

“Laugh and the world laughs with you; cry and you cry alone.” Emotional contagion and the theories that if one person starts smiling, others around him do too. Plus, mirror neurons and the interesting findings that there are neurons in our brains that react instinctively to a frown or a smile by putting our faces in similar positions.

“Opposites attract” – DISPROVEN. I don’t have the exact references but Margaret Neale of the Stanford Graduate School of Business uses references that in relationships, couples and friends that have similar values tend to stay together or friends longer.

Oooh! Here’s a fun one! “Work like you don’t need the money” Amy Wrzesniewski’s research on work as a job, career, or calling shows that people who see their work as a calling tend to like their job more, and to do a better job at work.

“Small steps, quantum leaps” (or any other idiom that means “small steps lead to success”) Albert Bandura’s research on mastery experiences shows that self-efficacy (the belief that I-think-I-can) is built best through small successes.

I love the one about crying alone, Senia, as I think that’s definitely been proven to be true as far as social contagion. I’m thinking of countless other sayings for a future column on the same topic, so thanks for already contributing and for running this outstanding forum!