MAPP Magazine: The Education Issue
Unthinking, Fast and Slow
Sit Write Share launches today
MAPP Magazine: The Power of Community
The Art of Insubordination: A Review
On Doing What We KNOW is Good for...
MAPP Magazine Articles on Positive Psychology Applications
August 31 is Launch Day for The Business...
New MAPP Magazine on Positive Humanities
Second Wave of Positive Psychology
Home All Why My Bat Globe Will Give Me a Longer Life (and make me smile, too)
AllCoachingGoalsHealthOptimismPathway 2 "Engagement / Flow"Positive FeelingsSavoring / In-the-MomentThree Pathways_1 Positive Experiences_2 Positive Traits 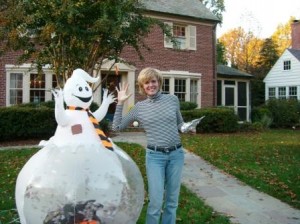 In mid-September, I pulled my trusty bat globe out of the garage and set it up on my front lawn.  And like clockwork, the negative comments soon came my way, but it didn’t matter.  I knew better.  Let me tell you why.

Last week at the Gallup Summit on Global Well-Being in Washington, D.C., I was privileged to hear some of the newest and most fascinating research in the area of Positive Psychology and well-being, and one of the presentations convinced me that my intuition about my bat globe and how it could help me live better and longer was confirmed.

Back to the bat globe.  A few years ago I saw this huge contraption at a local supermarket and although I was there to buy eggs, I left with this monstrosity under my arm, instead.  It was love at first sight.  The bat globe is a large ghost in a tie, with his clear plastic stomach featuring dozens of black bats flying around wildly.  Mr. Bat Ghost has a striped tie and a big grin, but the feature that brings me the most joy is that his fingers are always crackling with the air that is generated by the fan feeding into it.  It delights me.  It makes me smile, giggle, laugh, chuckle and grin all at the same time. 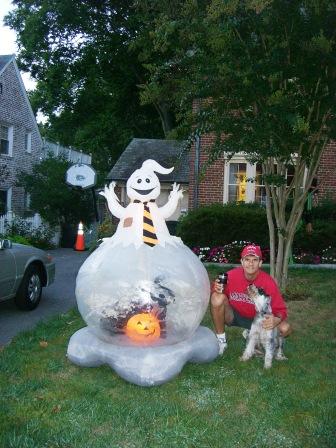 Last week, Sarah Pressman from the University of Pittsburgh Medical Center presented some fascinating work on the words used by 86 deceased psychologists in their autobiographies.  Without fail, the psychologists who used active-positive words like “vigorous” lived longer than the psychologists who described their lives and scenes from their lives with a predominance of words like “misery.”  While I found this useful (particularly because I have a second autobiography coming out next June), the most interesting part of her presentation was in the last slide.

“Without fail,” Dr. Pressman noted with a huge grin, “psychologists who used words like ‘chuckle,’ ‘smile,’ ‘laugh,’ and ‘grin’ in their writings lived 6 ½ years longer than everyone else.  Laughter really IS the best medicine,” she concluded.

That is exactly my point with the bat globe.  It makes me smile.  It also makes legions of small children smile, who beg their parents to stop as they drive by my house while they point at my bat globe.  Halloween night inevitably features every child in the neighborhood posing for a picture with the globe.  Adults who walk through the neighborhood for exercise also tell me that they alter their routes to see the bat globe and smile, and that they eagerly anticipate the appearance of it every fall.  My 18-year-old son even emailed to ask if the bat globe was up yet a few weeks ago, and asked me to send him a picture of the globe and our dog to cheer him up on hard days. 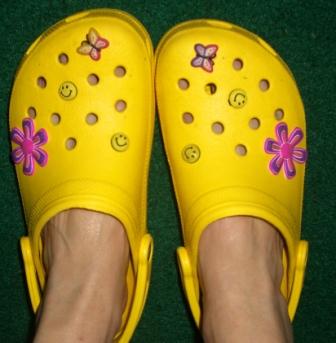 For every smile elicited by the bat globe, there is a frown.  I’ve been criticized by well-meaning friends who say that it isn’t proper to have a bat globe in a neighborhood like mine, where congressmen and company CEOs proudly tend to immaculate front lawns.  I’ve been told it’s childish and ugly.  I was also informed that no woman in her right mind would put up a bat globe in mid-September because I was making children think about candy.

Bah, humbug!  Now I have the research to back up my annual bat globe appearance.  I also now understand more about why it’s so important to me to have a license plate that reads, “WEHVFUN,” and yellow clogs that have tacky smiley face gibbets inserted in the holes.  I have also been known to ask pedicurists to paint smiley faces on my toes.  My birthday gift from my husband a few weeks ago included a cotton pair of pants that has nothing but smiley faces all over it.  Now I resemble the friendly nurses at the local pediatrician’s office in their garish cotton garb, but who cares?  If I smile, I’m ahead of the game and I’ll be the live wire at the nursing home in a few decades!

A few years ago, my daughter and I went on our annual mother-daughter outing, that year to Berkeley Springs, West Virginia, where we indulged in Roman mineral baths, an apple festival, and marathon walks and shopping.  We wandered into a crafts store at the end of our second day and instantly spotted signs on the wall that read, “Breathe” and “Giggle.”  Without any hesitation, we bought the signs and hung them on the wall of our bedrooms, where we are constantly reminded years later to relax and laugh.  I’ve lost count of the girls who have done sleepovers in my daughter’s room and commented on how good the “giggle” sign made them feel.

Yes, my bat globe is tacky.  Yes, it probably doesn’t fit with the tenor of my upscale neighborhood.  Yes, my friends sometimes roll their eyes when they see me snaking the extension cords all over the front lawn so that I can position the globe for maximum exposure.

But if it makes me smile, and makes someone else smile, I’m leaving the world a better place, and I may even be helping unsuspecting passersby to add a few well-deserved years to their lives.

Wait until you see my snow globe ……

I’d like to see a larger photo of the bat globe so I can fully appreciate the artwork. Can you post a version with larger dimensions?

I tried! Original was rejected as too large for upload, but I’m going to be tutored in how to make a bigger image, so stay tuned! And thanks for the interest in my infamous bat globe!
C.

I have already fallen in love with your great spirit. Thank you for having the courage to spread love and cheer from your corner of the universe within the conclave of “upscales”. I am trying to figure out a way to use positive psychology with inner city kids in DC with developmental disabilities. I’m getting the same kind of response that you did with your bat globe. I need help!!!

Thanks for your uplifting message,
Rosemary

Hilarious, awesome, wonderful, Caroline!
So when we jokingly discussed two years ago that painting toenails was like an intervention, you actually were thinking of the smiley faces! That marathon walking retreat where you got the Giggle sign sounds really sweet. Thanks for all the super pictures! I am so not surprised you have these yellow shoes!

Oh,my god!You must be an angel from a giggling planet.Larger pics of your bat glod are in huge demand here.I am in Beijing now and just back from the Gallup Summit in D.C..Wish I could have talk to you during the summit.You have such a lovely spirit and i have already been “contaminated” by your grin and joyful words.Looking forward to seeing bigger and clearer pics of the heroic “Bat Globe”,which is a pioneer of the upcoming Halloween and the ambassador of happiness.Sure,it will help those upscale people in your neibourghhood to take off their masks and re-enjoy the true,pure and simple joy,which has been lost long time before. Keep giggling and we will be watching you!

I’m afraid that this is as big as the bat globe gets on this post, without crowding out the whole post about why it even exists! But it made you smile, and that’s worth everything. thank you for your kind words, and I hope I’ll meet you at future Summits, where I might bring the bat globe as a fashion accessory.