Home All Nelson Mandela: A Life and Legacy of Strengths
AllCourageForgivenessGratitudeHopeHumilityHumorIn-the-NewsKindnessLoveOptimismPersistenceSelf regulationStrengthsWisdom

Nelson Mandela: A Life and Legacy of Strengths 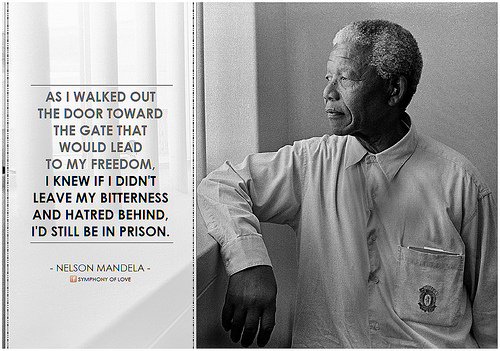 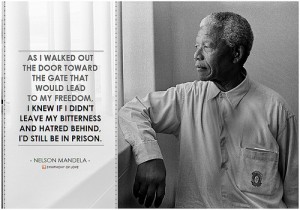 December 5, 2013 will be remembered for at least two historic events: First, the worst storm surge in Northern Europe for more than half a century, with mile upon mile of town and countryside in the UK, the Netherlands, Germany, and Denmark inundated with sea water and many people losing their homes, their livelihoods, or even their lives.

Second, news of the death of the first black president of South Africa, anti-apartheid icon, and Nobel Peace Prize winner, Nelson Mandela. I’m not normally drawn to writing about political leaders (the current political scene leaves me cold), and it’s not something we tend to do on Positive Psychology News Daily anyway. But Mandela was different in every respect.

When I learned of his death at about 10pm, although it was no surprise as he’d been gravely ill for some time, it was still difficult to find the words to express the sorrow that I felt. “What can you say?” I responded to the person who’d broken the news to me by text. “A truly special life, I reckon,” came the reply.

As it happens, Mandela had already made an appearance in my positive psychology work. One of the activities I do when introducing people to the VIA character strengths is to give them photos of various celebrity figures, including Mandela’s, and have them agree on what top strengths that person has. This strengths-spotting game works particularly well with youngsters who are usually very keen to air differing opinions about the strengths they see (or not). You can have a lot of fun with fictional celebrities as well as real ones. Think of Steve Jobs, Angelina Jolie, James Bond, and so on, and regardless of your liking for that individual, you can – I hope! –  find some VIA strengths to talk about.

Nelson Mandela, though, was a man apart. He embodied such a range and quantity of character strengths, including Humility, Optimism, Perseverance, Leadership, Fairness, Citizenship, Self-Regulation, Love, Judgment, Perspective, Humor, Forgiveness, Bravery, that I wouldn’t be surprised if you find yourself ticking off pretty much the complete list of 24. This is often what happens in my workshops.

What about your own strengths? If I were to show your photo to family, friends, and colleagues, what would they say? Would they recognize your top VIA strengths and the values that you live by? Often the people I meet in my work are understandably a bit reticent to talk about their strengths. I dare say it wasn’t Mandela’s number 1 consideration either. Nobody really wants to listen to someone droning on about Their Top Strengths.

The point really is whether you live by them and whether you make them work for you and for those around you. As Chris Peterson once said, positive psychology is about what makes life most worth living. This is where Mandela was a master. He lived his strengths every day, and they will live on in his legacy. His life was a life well-lived. I think this is what my friend meant by “a truly special life.”

In 2009, the United Nations adopted a resolution declaring July 18th as International Nelson Mandela Day, to celebrate his life and achievements. People are encouraged to take part in voluntary, cultural, sports, or arts events which embrace the values Mandela shared.

Editor’s Note: Just as we honored Chris Peterson when he died in October 2012 with an invitation to share stories about the impact that he had had on your lives, we invite you here to post your thoughts and emotions about the impact of Nelson Mandela on your thinking, values, and behavior.

Watch his retirement video to see and hear him speak: “Memory is a vital force in the life of people and nations and can help unite divided societies. My foundations will continue to bring people together, providing a safe space, especially for those who disagree.” Visit the Web site of his charities, the Nelson Mandela Foundation, the Nelson Mandela Children’s Fund, and the Mandela Rhodes Foundation.

Getting Ready for New Year’s Resolutions

Strengths and Mandela, what a terrific tribute. A rare man whose gem will always sparkle. A legacy of humble greatness rippling I hope forever in the universe. VISION and HOPE, he surely was the master of role modeling those for the world.

Thanks for all the helpful links, too.

Hope you and everyone have a wonderful holiday season as I bow my head in respect for a seriously incredible man.

“the point really is whether you live by them” – well written Bridget, on the button. One of the great things about Mandela was that he was never perfect, and knew so. Still, perhaps, the beset human of recent decades. Do you think that we all need all 24 strengths, just not all at once!
Best Angus

I too was drawn to this: “the point really is whether you live by them and whether you make them work for you and for those around you.”
Particularly of importance is how we make our strengths work for others.

I reciprocate the points made by Bridget in her write up. We in India feel very strongly about Mandela primarily because we identify him with Gandhi. They both fought for freedom and dignity without personal agendas. I salute this hero.

Thanks so much for your comments. It’s interesting how great leadership can be so understated and so unlike the traditional models put forward in business.

Many radio tributes this week emphasised how, whenever Mandela visited anywhere, he would make a point of meeting and making a connection with people behind the scenes, like the kitchen or cleaning staff. I really liked that aspect of Mandela – I know many politicians do the ‘meeting the public’ thing but he was genuine about it. You can’t really fake having the human touch. He leaves a great legacy.

As usual my PPND posts are a two person job – Kathryn Britton has done some fantastic editing and supplied the links you refer to. Thanks Kathryn!

Warm wishes from the UK
Bridget

Long time no see! Thanks for getting in touch – I hope things are going well for you and yours. It’s interesting how so many of the VIA strengths you can so easily attribute to Mandela – he’s very unusual in that regard don’t you think?
Personally I don’t think you need all 24 – you can use the strengths you have to compensate for gaps and/or help you develop others. The idea of having a strength ‘in service’ of another is worth exploring…

Have a great festive season up there in Scotland

Warm wishes from down South!
Bridget

Lovely to hear from you again – it was good to catch up albeit briefly on the call the other day.

I happened to be looking something up in the VIA Handbook a few weeks ago and remembered the criteria for strengths, in particular the one about not diminishing others. And I wondered if perhaps we could also go down another avenue, which is how we make sure our strengths work for other people in an active sense, as well as for our own well-being. I’m still very drawn to Chris Peterson’s summing up of Positive Psychology as ‘other people matter’. Sheer genius.

Thanks for getting in touch – it’s great to know that PPND reaches so many continents!

Many people have likened Mandela to Gandhi in their tributes – Obama made a similar point at the memorial service this week. I expect Mandela wouldn’t have seen it this way though, such was his humility.