Does it matter whether you live in Hope or in Hell*?

* Hope and Hell are both located in Michigan… 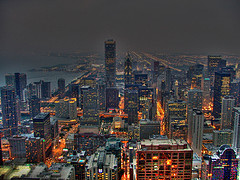 
One of the aspects of studying positive psychology which really appeals to me is its sheer breadth – the fact that it applies in so many fields of human endeavour and experience.  Positive psychology appears in disciplines as diverse as art and design, education, politics, and business. So this new research which looks at urban positive psychology particularly caught my eye this week.

Most of the scientific research related to cities focuses on their geography, history, economy, or politics. Very few studies have looked at them from a psychological perspective. Why does this matter, you might wonder. Can psychology tell us anything interesting about cities and those who live in them anyway?

You’ll be familiar I’m sure with national stereotypes, and the fact that in many countries we distinguish between southerners and northerners, or those who live in the east and  the west.  Research by Jason Rentfrow at the University of Cambridge, UK, and two colleagues in the US suggests that there are regional variations in personality traits. For example in the United States, there is a concentration of Woody Allenesque neurotics on the East Coast and those open to experience (psych-speak for hippies and bohemians?) on the West Coast. Such geographical variations have been brilliantly mapped on Richard Florida’s Who’s Your City? website.

But do people who live in different cities really have different psychological traits and dispositions? Few psychologists have studied variation across cities before now and those who have have focused on the negatives such as obesity, psychiatric disorders and violent crime. So new positive psychology research into city-level strengths by Nansook Park and Chris Peterson from the University of Michigan is not only interesting, but also very refreshing. As they point out, it’s high time we looked at what’s right with city life! 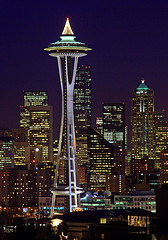 Seattle: A City of Head Strengths?

“No man is an island.” So said English poet John Donne back in the 17th Century. Interpreted from a psychological perspective this means that we’re all influenced to a greater or lesser extent by our surroundings, whether that’s the family we are born into, the neighborhood we play in, the community we’re part of, or the city we live in.

Previous authors have described cities which are known for their creativity and accomplishment (i.e. cities which are home to a large proportion of wealthy people,  an outstanding university,  which have made outstanding contributions to the arts and sciences, or to which university graduates flock) as elite,  or as superstars, or as hotspots.  So what do we call those cities which don’t reside in the higher echelons of such urban league tables? Non-elite? Luke-warm spots? Or how about centers of mediocrity?  Richard Florida’s answer was to call such non-elite cities dutiful. But this doesn’t really do them justice. 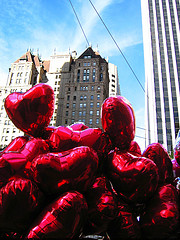 Hearts in the City


As Nansook Park and Chris Peterson point out, even those cities which don’t make the elite/superstar grade must have some good things going for them. They suggest instead calling them ‘kinder and gentler’ cities. Taking a positive psychology perspective on the issue, they used the VIA Inventory of Character Strengths to explore whether strengths differ across cities in the US and the relationship between creativity and strengths. Previous research had identified two important dimensions to character strengths, namely

What Does the Data Show?

They calculated the average strengths scores for VIA respondents from each city, then did a factor analysis, excluding four strengths ( bravery, perspective, self-regulation and social intelligence) which could not be assigned to just ‘head’ or ‘heart’.  Two factors emerged which accounted for 74% of the variance, being strengths of the head (appreciation of beauty and excellence, creativity, curiosity, judgment and love of learning) and strengths of the heart (fairness, forgiveness, gratitude, honesty, hope, humor, kindness, leadership, love, modesty, persistence, prudence, religiousness, teamwork and zest). 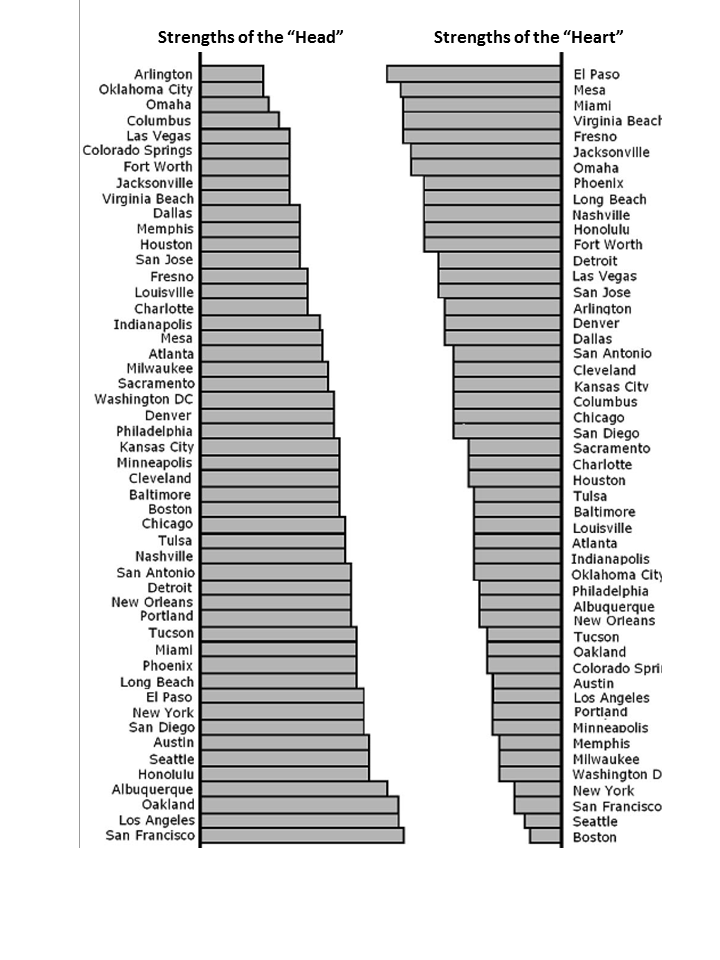 Rentfrow, P. J., Gosling, S. D., & Potter, J. (2008). The geography of personality: A theory of the emergence, persistence, and expression of regional variation in basic traits. Perspectives in Psychological Science, 3, 339–369.

City of Big Shoulders by Creativity+   Timothy K. Hamilton:
The Space Needle at Christmas courtesy of Andrew E. Larson
Heart of the City by 24th Century:

Bridget – I keep thinking about Todd Kashdans concept of psychological flexibility. Perhaps the best cities have a mixture of heart and head strengths and have the ability to tolerate this diversity.

And according to the polls I live in one of the best cities on earth – Melbourne (Australia). And upon reflection I suspect our greatest strength is diversity.

By the way its interesting that peterson left out perspective, self-regulation and social intelligence. I suspect that these are the ingredients that are essential to allow people to live together cohesively.

I think it’s very interesting that New York City is so far down on the list of head strengths. As one of the largest (if not the largest? I’m not sure) cities in the US, it is known around the country for its inhabitants who in many ways embody the head strengths. As you mentioned, stereotypes abound, and as a Southerner who spent some time living in NYC, I have met multitudes of extremely kind people in this city that supposedly has so many rude people.

How do you think stereotypes about a city’s head or heart strengths (or lack thereof) influence it and the people who live/move there?

Bridget,
Very interesting article. I am currently taking a positive psychology class. One of the articles we studied is “Strengths of Character and Well-Being” by Park, Peterson, and Seligman. In that article they stated that the character strengths of hope, zest, gratitude, love, and curiosity are most strongly associated with life satisfaction. Do you know if Park and Peterson looked at satisfaction with life in their new research on city-strengths? Since the strengths of the heart included four of the five strengths most associated with life satisfaction (hope, zest, gratitude, and love), I wonder if the participants in the new study reported high life satisfaction if they lived in a city with high heart strengths. An exciting area for research would seem to be what encourages high heart strengths in cities.
Thank you! Enjoyed your article.
Sharon

Great article,
I’m from Canada and haven’t been able to find a similar article but the stereotypes associated with main cities here are the same, ie: Vancouver’s downtown East side and Calgary’s oil money. I think city committees and local media would improve their locations greatly by focusing on the positives.

Interesting article! I have heard talk at random points in time about personalities and city correlations and the question that Alexandra posted above. I have always heard about Seattle and it’s high depression rates – mostly attributed I think to weather – or so I have always been told. But it is interesting that Seattle does indeed fit this stereotype and the head-strength character you describe although New York does not. My question however stems from this stereotype of Seattle; do you know about any research or correlations between climate of a particular area and the character strengths that may be dominant in those areas? It could be just one small factor that contributes to how cities affect individuals, just as individuals I think affect cities. Hmm…something to think about. Thanks!

Hi Oz, thanks for introducing the topic of psychological flexibility. I’m still trying to grasp what it really means and how it’s different to what’s gone before (noting that Kashdan said it was ‘a slippery construct to define’!).

Personally I don’t like the ‘kinder and gentler city’ label, but maybe once we know a bit more about the cities which make up this category it’ll make better sense. What I really like about the research is the way it points to questions which haven’t yet been asked.

Thanks for your comments. I’m sure that the overall characteristic of a city must influence people in terms of moving /not moving there, even if it’s not conscious. But can a city have strengths independent of the people who live and work there?

There are also limitations to this research which I didn’t have space to cover, such as making inferences about individuals on the basis of aggregated data for a group (ecological fallacy), which means that that relationships at the city level may not translate to comparable relationships at the individual level. There’s still a lot of research which needs to be done in order to answer the question you raise!

“There were no significant correlations with life satisfaction, negative affect, or depressive symptoms, meaning that cities did not differ with respect to these as a function of head or heart strengths. However, residents in the kinder and gentler cities — those with greater strengths of the heart—reported more positive affect…, a greater orientation to positive emotions…, more meaning in life… and less search for meaning, perhaps because they already had a sense of purpose.”

…and their tourism industry!

This research did have a paragraph or two about possible environmental influences – on the weather it says:

“…among the 50 largest cities…the heart cities are more likely to be warmer ones – literally as well as metaphorically. Across cities, the correlation
between the average yearly temperature and the heart strengths composite was .48 (p <.001)…. why not consider the…hypothesis that warmer places…afford more positive interactions, if only because residents are more likely to be outside much of the year…? The more one interacts with other people, the more one develops emotional and interpersonal strengths of character (Peterson & Seligman, 2004).

Does that help answer your question?

I have an ENFP PsyType profile but my F-scale is the weakest. I exhibit many of both characteristics in the head/heart list. Great article.