Better the Devil You Know

When I stumbled upon research about the effects of the economic crisis on well-being, I was primed to be curious because I had just read Louisa Jewell’s critique of Bright-Sided and the numerous comments it inspired (29 at the last count).

One of the key findings from Positive Psychology studies is the so-called adaptation effect, which basically means that you get used to both increased prosperity and increased adversity and return to your natural levels of happiness. If you’ve ever had a promotion at work, you’ll no doubt know that the novelty wears off all too soon.

The research aims of Professor Carol Graham, Soumya Chattopadhyay, and Mario Picon (all from  the University of Maryland) were to better understand the effects of the US economic crisis on well-being and to determine if individuals adapt both to the bad news of the crisis and then to the good news of potential recovery.

The economic data used in the study came from a variety of sources including the Bureau of Labor Statistics, the Survey of US Consumer Sentiment by the University of Michigan, and the Dow Jones Industrial Average and NASDAQ.

The researchers also created a news time line of 42 economically important events (both positive and negative) such as the SEC ban on short-selling, Wells Fargo’s record Q1 profits and GM’s bankruptcy.

As well as demographic, geographic and socio-economic data, well-being data was taken from the Gallup Daily Poll on well-being from January 01 2008 to June 30 2009, using the following questions:

Of course, the Gallup Daily Poll is a collation of cross-section surveys, in other words it covers a different representative set of people each day, rather than following the same people over time.

In terms of how particular traits and behaviors affected overall well-being during the crisis, the findings were consistent with other studies, for example: 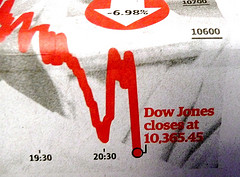 Happiness and the Economic Crisis

The Influence of the Media on our Happiness

Of course, within the overall happiness trends, there are daily movements linked to the 42 economically important events mentioned above. It’s interesting that the events don’t necessarily influence happiness in the way we might expect. Even events which might be expected to have a positive effect on well-being, such as Obama’s inauguration and Tim Geithner’s financial stability plan, had a negative correlation during a downward trend. But once the happiness trend turned the corner, public reactions remained positive, even to negative events such as GM’s bankruptcy. 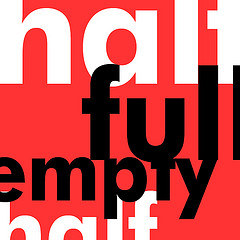 Half full, half empty

Do some people adapt better than others? 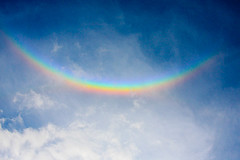 The researchers suggest that it is uncertainty itself which is bad for well-being rather than negative events per se, because individuals seem better at adapting to unpleasant certainty than they are at dealing with uncertainty. In other words, better the devil you know.  Once the Dow Jones reached rock bottom we knew where we stood, even if we didn’t like it.

And even when happiness levels started improving, people remained pessimistic in their assessments of their own standard of living and the country’s economic situation, which could be explained in terms of downward adaptation. People adjust to lower standards of living and assess them as such, even while their happiness levels seem to adapt and recover.

Professor Carol Graham from her website at the University of Maryland

Half Empty Half Full by the|G|™

The conclusion that uncertainty is the biggest cause for worry makes me think of the quote by Theodore N. Vail: “Real difficulties can be overcome; it is only the imaginary ones that are unconquerable.”

Thanks for this, it sums up the problem very neatly. Our son has an overactive imagination – at the moment it’s sharks in the swimming pool…

I also like this quote, which I saw on the side of the British Library: “Nothing in life is to be feared. It is only to be understood” (Marie Curie).

Seriously, the conclusion that “it is uncertainty itself which is bad for well-being rather than negative events per se, because individuals seem better at adapting to unpleasant certainty than they are at dealing with uncertainty.” resonates with me in an intuitive way. It reminds me of how so many children are screwed up early in life because they are constantly dealing with the uncertainty of an addicted parent, or other uncertainty, which seems to leave lasting scars.

If this is indeed true, I wonder if the happiness correlation would show up with a psychometric tests.

For example, for Myers-Briggs fans, do you think the Judging / Perceiving scale might correlate with ‘tolerance or predilection for certainty’ and happiness? Your thoughts? There might be a masters thesis in there.

Bridget, thanks for an intriguing, nuanced view of how changes in the economy affect people. Really well-written, interesting, and sticky.

Bridget,
Thanks for the intriguing, well-researched look into the “happiness effect” of the economy. I found the research about the rise in happiness leading the market very interesting. What I’d love to see correlated is when risk aversion gives way to reward potential. Since we have more propensity to avoid risk than seek reward (Schwartz, Kahneman)it would be interesting to see how much the market, or the happiness quotient would have to turn around for the majority of people to start reinvesting.
Thanks for the article. Great food for thought.
Scott

Thanks for your comments. That’s an intruiging idea about MBTI – I’m afraid psychometrics isn’t my subject – hopefully another reader will comment on that.

As for the impact of uncertainty, I first came across it in a book on change management, ‘Managing at the Speed of Change’ by Daryl R Connor. His writing on uncertainty and why people resist change is really interesting. He recognised the need for managers to become more resilient, although these chapters are less useful (he was writing in 1992, before resilience became such a popular subject!). Nevertheless, it’s a great book for the lay-person, and I’ve often referred to it.

It’s often difficult to judge whether others will enjoy what you’ve written, so it’s good to hear your feedback. And I have to say thanks to Kathryn Britton for her excellent editing – as usual it’s added enormously to my original posting.

Carol Graham has recently published another book which might appeal to you: “Happiness around the world: The paradox of happy peasants and miserable millionaires”.

Adrian – I would suggest that the ENTP type might cope best with uncetainty.

Thanks Bridget, I will definitely look into that book!

OZ: Yep, I agree, I would have a hard time choosing between ENTP and INTP for ‘uncertainty tolerance’…

I should add that that Connor isn’t a psychology/science book.

re MBTI – have you looked on Athens to see if there is any research?

Hi Briget, I enjoyed your article.

You comment that the researchers suggest that it is uncertainty itself which is bad for well-being. This raises a question in my mind about how much we have learnt from Positive Psychology, Appreciative Inquiry (and so much more, including of course, mindfulness) about how we can learn to sit with uncertainty and to be ok with it. Not easy! but possible, with a little bit of work.

Thanks for your feedback Amanda

I think you’re right, and I wonder if some of it is driven by what seems like a complete obsession with setting and achieving goals(certainly in the workplace, and increasingly in our personal lives). ‘Doing’ rather than ‘being’. I’ve recently been reading some of Jon Kabat-Zinn’s work on mindfulness and thinking about thinking. Brilliant stuff, I highly recommend it.