The chief value of money lies in the fact that one lives in a world in which it is overestimated.

Readers of my previous articles in Positive Psychology News Daily may remember that one of my fascinations with positive psychology is the existence of its many paradoxes. Some of these have acquired official labels, such as

Other paradoxes are discussed in positive psychology circles, although not all have research evidence to support them, such as

So as soon as I came across this new research report “Money Giveth, Money Taketh Away: the Dual Effect of Wealth on Happiness” by Jordi Quoidbach, Elizabeth Dunn and colleagues, my eyes lit up. The researchers were interested in finding out whether there’s any evidence to support the widely-held belief that experiencing the best things in life (their examples are surfing Oahu’s famous North Shore or dining at Manhattan’s 4-star restaurant Daniel, but you can substitute any that you hanker after) undermines your ability to enjoy life’s little pleasures, things like sunny days, cold beers, and chocolate. 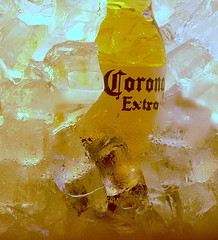 Often people explain their desire for more money in terms of providing the opportunity to buy and enjoy more possessions or experiences, in other words, it’s not the money per se that they want but what the money gives them access to. We already know that the ability to savor is central to our well-being – it’s one of the empirically-tested interventions. Jordi Quoidbach and colleagues go further – perhaps even thinking about money might lead people to believe that luxury possessions or experiences are obtainable, which might in turn undermine their ability to savor and lead them to take the everyday pleasures for granted.

Study One: How does priming with thoughts about money affect savoring?

The paper outlines two studies carried out with European and Canadian university staff and students. The first study was designed to test whether thinking about money has a causal impact on savoring. Study participants were randomly assigned to one of two conditions: 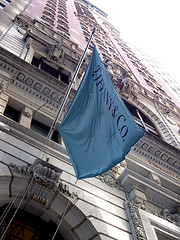 Tiffany’s – Where to Shop

Current wealth, money prime and savoring: Participants’ wealth significantly predicted lower ability to savor positive emotions, and those who were simply primed to think about money by looking at a photo of a pile of Euros as they completed the questionnaire exhibited significantly lower savoring scores than those who didn’t see the photo.

In summary, the study suggests that wealth may not actually deliver the happiness you’d expect, because it undermines savoring.

In the second study, participants completed a questionnaire about their attitudes to chocolate. The questionnaire was presented in a binder, in which an adjacent page showed materials from an ‘unrelated study’ including a picture of money or a neutral photo. The participants were then asked to eat a piece of chocolate and to complete a follow-up questionnaire. 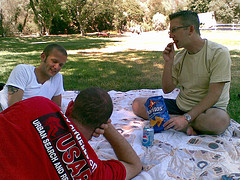 The participants were observed surreptitiously as they ate the chocolate. The observers measured the amount of time the participants spent eating the chocolate and rated how much enjoyment they showed. The results were controlled for gender because the women spent significantly more time savoring the chocolate than the men. I wonder if the reverse would have been true for a glass of cold beer!

Implications
Returning to the opening point about paradoxes, it seems that wealthier individuals report lower savoring ability, and even being reminded of wealth produces the same negative impact on savoring as actual wealth. The researchers suggest that you needn’t actually visit the pyramids of Egypt or spend a week at the legendary Banff spas in Canada for your savoring ability to be impaired – simply knowing that these peak experiences are readily available may increase your tendency to take life’s small pleasures for granted (p4).

So now that you know that wealth and being reminded of wealth undermines your ability to savor, will you look at your wealth, your desire for money, or those luxury items or experiences that you hanker after in a different light? Will you consciously spend more time looking out for and savoring life’s smaller pleasures, rather than strive for the money to acquire the larger ones?

My yacht! courtesy of antiguan_life

Labor Day in the park courtesy of craig1black

Having been homeless and at the mercy of those who would do me harm, I can say without reservation that money enhances happiness. Money enables security and the pursuit of a wider range of eudaimonic activities than poverty or even working class wages. Money can lead to an upward spiral and can affect internal factors such as resilience. If you can earn, you can provide. If you can provide, perhaps that belief in yourself can prosper and grow.

Besides, as usual, life offers you more than the binary choice between having money as a superficial consumer and a spiritual mendicant.

I have known rich and poor and the ones who seem to live the fullest are the ones who combine externals like money with internals like savoring and gratitude. They tend to be quite hardy. They are less happy when their goods are taken away, but still better off mentally than those poor sods who lack internal wealth. Those poor internals tend to see life as a wilderness without end and no amount of money will solve what is essentially an internal problem.

Thoreau said something about seeing sunshine through the homeless shelter window and savoring it just the same as if he’d seen sun through a mansion’s pane. That was nonsense. Living your life as a prey animal is awful and no amount of glitzing will ever change that. Nor should it. There are both objective catastrophes and boons. Making lemonade from lemons is grand, but let’s not forget that lemons are sour. They need squeezing through the pressure of resilience to make lemonade. Hope provides the sugar and the stirrings are the cha-ching of the cash register.

I don’t understand your first study.

You state “Participants’ wealth significantly predicted lower ability to savor positive emotions, and those who were simply primed to think about money by looking at a photo of a pile of Euros as they completed the questionnaire exhibited significantly lower savoring scores than those who didn’t see the photo.”

Are you saying you chose people by the money they had then sorted them and the richer or poorer of the two enjoyed their experiences less?

Thanks for your comments. Yes you’re right about meeting basic needs such as food and shelter. It’s generally agreed that people need a certain amount of money, from memory I think it was something like $20-$25k a year. For your average earner this is low, whereas for the homeless person, of course, it’s way beyond reach. The research suggests that above the basic level, people don’t actually get that much happier.

To some extent it must also depend whether or not ones values are tied up with acquiring money. I’m not sure if there’s research which specifically looks at people’s goals or values, money and well-being. Perhaps someone else reading can comment on that.

Sorry that this wasn’t clear.

In the first study all the research participants were asked to report their wealth (life savings as well as to report their monthly income after tax). Some declined to answer, so they weren’t included in the study. Those who did answer were randomly assigned to the money prime condition (where the research questionnaire displayed a photograph of a large stack of euro bills) or the control condition (where the photo was blurred).

The questionnaire presented them with little scenarios and they had to imagine how they would respond in that situation. Examples given were:
* finishing an important task (contentment),
* spending a romantic weekend away (joy), or
* discovering an amazing waterfall while hiking (awe).

They were given 8 different responses, including 4 savouring ones, to choose from. They had to choose the one(s) which best characterised their typical behaviour. So in Study 1, the participants didn’t actually have to experience something physical, they just imagined it, and were asked to identify how they would most likely respond.

What the researchers found was that the participants’ wealth predicted lower ability to savour and that even being reminded of wealth (by seeing the photo of money) seemed to have the same effect.