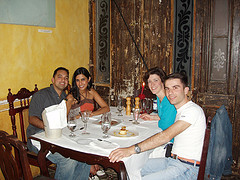 Who was it that said that the family which eats together stays together?

Sharing a meal with family or friends is as much a social event as it is a nutritional one. In some reports, shared meals are recognized as a sign of a strong social unit.

But often we hear how infrequently today’s families eat together at the same time and at the same table. Parents are busy working, get home late, and don’t have the time (or energy) to go round the supermarket and cook. Kids eat snacks on-the-go when hunger pangs strike, then don’t feel like tucking into anything more substantial when it’s put on the table. A favorite TV show begins just as food is dished up, so one or more members of the family misses the meal to watch it.

To some extent, the value of eating together is backed up by research. The UNICEF report into children’s well-being in rich nations suggests the number of times that children and their parents ate meals together was a measure of the quality of family relationships.

You can see from the graph below how a range of wealthy nations fared on this measure.

Mealtimes are now a priority in my family. Assuming both parents are home, we sit and eat dinner together every day (I’d say it works out about 80% of the time). Sitting down together is an important occasion: we talk about what’s been going on for each of us during the day, we make plans and solve problems, we share jokes, have fun and generally enjoy each other’s company. But it hasn’t always been this way – we chose to make it a priority.

Today, BBC radio’s Food Program focused on paladares. A paladar is a small, family-run Cuban restaurant which traditionally sprang up in response to official, state-controlled restaurants. Unlike official restaurants, paladares aren’t advertised, so you hear about them by word–of-mouth. The Food Program featured ten secret paladares , not in Cuba, but in the northeast of England, organized as part of Newcastle’s EAT! festival.

The festival’s organizer, Simon Preston, found ten chefs of different nationalities willing to open their homes and cook authentic food for a small group of complete strangers. The cuisine ranged from Colombian to Chinese, Nigerian to Pakistani. When guests bought tickets (very reasonably priced at £15 per head), they could choose which cuisine they preferred but the venue remained secret until a few hours beforehand — they wouldn’t know their fellow diners, or the host, until they met them at the venue.

One guest interviewed on the BBC program commented on the courage of the host cooks in taking on such a challenge. On reflection I realized both hosts and their guests were demonstrating a great many character strengths:

Curiosity and open-mindedness: For the guests this was a journey of exploration, a voyage into the unknown. They would be trying something completely new and different. They needed to be inquisitive and open to new experiences, to have a sense of adventure, sampling unfamiliar food and cultures and meeting total strangers at a shared table for the evening.

Vitality, joy and pleasure: The atmosphere of each dinner party was zestful, energetic and full of pleasure. Some host cooks wore traditional national costume, others played traditional music. The Cuban host even treated his dinner party guests to an impromptu salsa lesson. 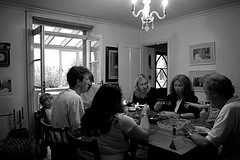 The tradition of paladeres reflects the three routes to well-being outlined in Martin Seligman’s book Authentic Happiness . Sharing a home-cooked meal with people you haven’t met before can be a meaningful and engaging experience, as well as pleasurable and fun. And not only that: it reflects the importance of building human connections, the heart of psychological well-being.

I shan’t be looking at meal-times in quite the same way from now on.

(Film Review) UP: The Power of Now for New & Old Adventures

I really enjoyed this article. It reminded me of an annual event in the village that my mother lives in in Hampshire, UK. The community hosts a “progressive supper”. Everyone meets at the village hall at the appointed hour on the appointed day. They get given an envelope which tells them which home they need to go to for their starter / appetiser course, what time they need to move and where they are going for their main course / entree and then what time they need to move on and where they are going for dessert. At the end of the evening, everyone gathers back in the village hall for coffee and chocolates!

It’s a great way to develop friendships across the community and is a really social event where everyone is mixed together with the chief purpose of having a great time whilst sharing a meal! Literally 100s of people participate.

Maybe we can take this paladeres idea a little further and foster positive communities?

Oi! You’re telling the truth, Bridget!
I think this is the most important thing. No phone calls during the evening meal. Calm, easiness.

I’ve heard a lot of pos psych researchers go over the Three Good Things (Three Blessings) with their kids over dinner.

Thanks for idea of the “progressive supper”. Sounds like great fun to me; I wonder if the place I live in would be up for it. I’ll suggest it to a few people and see what they think.

BTW can you email me at bridgetatworkmaddotcodotuk?

Great to meet you at the Philadelphia conference at long last!

Along a similar theme, we always used to say Grace before a meal at junior school, but not at senior school. Maybe there will be a pos psych revival of it.

Bridget, do you by any chance have a clearer image of the graph? I can’t read the country names. Sometimes making a .gif file instead of a .jpg file makes things better.

Hi Bridget, I find you’re article very important not only on the family level but also on the eating habits level. When parents eat with their children they can monitor what the child eat and also set an exemplar.
Also I have a question to you and to the other students. Im medical psychology.

I have tried to find models/ research / article on the subject but unfortunately I came up with nothing.

Do you know any models/ research / article

That compares the two therapeutic approaches, or maybe research on positive psychology and diet in support group?

Dear Bridget,
I loved your article. I agree sharing family meals together makes for a stronger family bond. My two school age daughters, my husband and I all have hectic schedules. Which includes work children’s extra activities like: swimming, karate, and girl scouts. Though we always make time to eat a home cooked meal together though it may be a late dinner; but at least we are all together talking and sharing about our day.
Has there been any studies that show which families eat family dinners more together: single parents with children or married couples with their children? Also, does it help if children contribute in the preparation of making the families dinners along with the mother or father?
The paladares is a very interesting idea to experience new cultures besides your own. It sounds like a great wonderful experience to be a part of that.
I enjoyed reading your article!
Thanks,
Rose