Creating a Culture of Appreciation 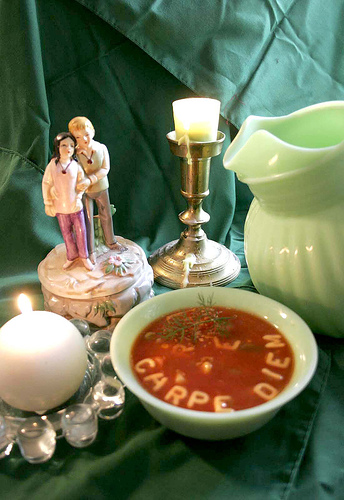 We swim in the soup of constant discourse. The content and meaning of that discourse flavors our lives.

Say you are driving your child to school, and I cut you off in traffic (dead annoying). If you say ‘Men drivers – all the bxxx same” then your child has learned that this problem is pervasive (all men) and permanent (no hope).

If you say ‘Agh, I wonder what is wrong with that guy today?’ then your child has learned this is a temporary problem (today) and limited to one man (me).

Discourse like this goes on all the time – in offices, families, parties and in the street. Our chatter and its meaning is so ever-present, it often becomes submerged below awareness as explanatory style. But this soup we swim in it affects us.

It is easy enough to create a culture of depression. As humans we seem to be experts. Even when our natural skills in this seem to fail us we can call up ancient as well as modern manuals. Most cultures have norms and sayings that warn against too much enjoyment or success — they are like safety valves. They protect us from too much hope. I can’t blame us; sorrow, pain and death are unavoidable in life.

But, we have to be aware of the unintended effects of negative discourse. We should stop passively swimming in our soup and step forward as cooks in the kitchen. Intentionally, we can flavor life with appreciation.

Enjoy making your own soup!

The answer to the question posed in the title is ‘yes.’ Using a total of 128,106 answers to a survey question about happiness,’ we find that there is a large, negative and significant effect of inequality on happiness in Europe but not in the US. There are two potential explanations. First, Europeans prefer more equal societies (inequality belongs in the utility function for Europeans but not for Americans). Second, social mobility is (or is perceived to be) higher in the US so being poor is not seen as affecting future income. We test these hypotheses by partitioning the sample across income and ideological lines. There is evidence of inequality generated’ unhappiness in the US only for a sub-group of rich leftists. In Europe inequality makes the poor unhappy, as well as the leftists. This favors the hypothesis that inequality affects European happiness because of their lower social mobility (since no preference for equality exists amongst the rich or the right). The results help explain the greater popular demand for government to fight inequality in Europe relative to the US.

Altizer, A. B. (1973). Self and Symbolism in the Poetry of Michelangelo, John Donne and Agrippa d’Aubigne (Archives Internationales D’Histoire Des Idées Minor). The Hague,, Martinus Nijhoff.

Offer, A. (2006). The Challenge of Affluence: Self-Control and Well-Being in the United States and Britain since 1950. Oxford, Oxford University Press.

The Measure of Your Powers

I love the lightsaber picture!

Angus, I think you are so right – it’s those quick, non-mindful moments when we can get into so much trouble. Just the off-the-cuff comments that we can make – within hearing range of kids, colleagues, friends, and even ourselves! How does it help to get my sympathetic nervous system going at full speed over a small bother?

I really enjoy Kirsten, Wayne, and Kathryn’s discussions about mindfulness on this site, and what I like most about their discussions is that they aim to bring the mindfulness to a practical level – how do we apply this in our lives? I see you doing the same thing with this article, and bringing awareness, acceptance, change when needed to our actions.

Angus, thanks for a delightful article! I agree with you that a culture of appreciation is a good place to start — in business and personally. Not always easy, but it makes a huge difference.

Oh, and thanks for the information on US vs Europe happiness. The finding about rich leftists in the US made is funny: I wonder if that means they are unhappy because they are so unequal to poor people? Or are they unhappy that poorer people aren’t rich? I’ll stay hopeful that Europe will increase social mobility….
Christine

HI, Angus–
I love visual metaphors and the soup one is great. Like my pizza one, it speaks to the point that we have a lot of choice about what goes in (or on) the recipe.

Research helps us know what works for the research sample, thus narrowing the range of choices to ones that have been shown to work. Research is like a menu of tasty meals in that way. There are “restaurants” for mindfulness, resilience, building positive emotion to name a few.

Here’s to a great soup menu!

That lightsaber picture ROCKS! I want one of those!

I love the “answer to the question” box at the end. This really makes me wonder about the roles of beliefs and genetics when it comes to happiness. Is it better to be a republican who is a hard-charging religious person? Because according to research, they tend to be happier. But are those sets of beliefs pragmatic to have in order to build a larger society with greater amounts of happiness for all of society? And, are political beliefs genetic… just as we wonder about optimism vs. pessimism as you mention in your article… how much is genetic and how much is effected by the social norm.. the “soup”? Thanks for the reminder that it’s better to take control of our beliefs… I’ll leave the genetics to the Man Upstairs.