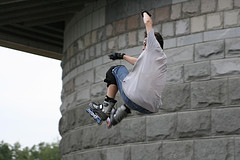 Preparing for a workshop I was running last week, I e-mailed the 20 or so participants with briefing notes and added a PS to the warn them that I would be hobbling on crutches as I had “recently broken my leg whilst roller-blading in the Andes with a bunch of Brazilian dancers.”

Two delightful people initially believed my explanation to which I could only say, “I really wish I were the kind of guy that could be true of.”

The more mundane truth was that some old fool (me) had left a heavy suitcase in the kitchen for some other old fool (me) to trip over, which incident led to a lot of swearing, a hospital visit, x-rays, and now a leg in non-weight-bearing plaster for six weeks.

I am learning lots through this new experience – not least that
a) the world needs an epidemic of grab-rails and
b) if you are going to break your leg the two most important things are to be young and thin (less weight to hobble).

Maybe the epidemic of grab rails will happen, and I am certainly committed to losing a stone or so when I get my leg back (that will still not qualify me as thin), but though I can do much to age better, I cannot become younger. Caius is a man. All men are mortal. So Caius is mortal. Which I have long believed was obviously true for Caius. But for me? – well it appears so.

So I may hope for much but not unrealistically, as the wonderful work by Prof. Rick Snyder teaches us. Shane Lopez wrote, following the untimely death in 2006 of his close colleague and friend, “Rick was in the business of changing lives, plain and simple. As my mentor he taught me how to honor suffering and seek out hope in daily life. As a leading positive psychology scholar, he demystified hope and forgiveness for the world.”

The partnership of Lopez and Snyder has given us so much, including of course the epic Handbook of Positive Psychology and most recently Positive Psychology: The Scientific and Practical Explorations of Human Strengths which seems set to be the foundation text for decades, with Snyder’s vision and spirit still helping guide future revisions.

In the introduction to this most recent text, they quote Melvin (Jack Nicholson’s character in As Good As It Gets) “You make me want to be a better man”, to which of course Carol (Helen Hunt), quite stunned, replied: “…That’s maybe the best compliment of my life.”

Professor Rick Snyder inspiringly showed how being better for other people rather than better than others is the motivational core of positive psychology – the original example is Marty’s story of being inspired by his 5-year old daughter Nikki to stop being such a grouch. Of course we can have dreams (even of Brazilian dancers though don’t tell Shelagh), but our best goals and hopes are in relation to others including (as Daniel Gilbert highlights in Stumbling On Happiness), our future selves in relation to others.

Harry Potter and the Power of the Positive

Does TV Make Us Happy?

Angus: Sorry about your leg. I hope you heal quickly! Just this morning I was looking over my Positive Psychology books and selected one of Rick Snyder’s books on HOPE for some reading at the beach this week. His work will influence the field for years and years. Incidentally, I recently read “Stumbling on Happiness” by Gilbert and I enjoyed it very much. I recommend it to everyone. All the best, Doug

Sorry about your leg but love your explanation in the P.S. I was hoping it to be true! Or perhaps the injury occurred during an unexplained bout of MAPP dancing in orange argyle socks?

Isn’t it good to know that pathways (with handrails) and agency fueled by daily (but fortunately short-lived) practice will leave you healed and ready for more adventures.