I write these thoughts in the news of the shooting rampage at Virginia Tech. 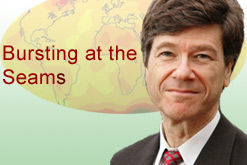 Jeffrey Sachs
The science of positive psychology is-value free and as Shane Lopez writes, we still don’t know if it will work. Does it furnish our mentalities enough to save the world?  I have been listening to the Reith lectures by Jeffrey Sachs, an economist (UN and Columbia) who sets out clear pathways to eradicate extreme poverty within a decade – for example providing mosquito nets for all children in Africa over the next ten years would cost less than the Pentagon spends each day – and I have been struck by the skepticism that infuses all the questions, the doubts, the bias to the negative, the lack of hope, the sabotage of agency. Log on to www.bbc.co.uk/radio4/reith2007/ to check out this extraordinary battle between possibilities and doubt.

Does it matter?  Would it be possible for positive psychology to be true, authentic and effective for individuals isolated from others experience, life circumstances?  Surely not.  The science is value-free, like nuclear energy, but its application is inevitably and always value-driven.  Pawelski, Peterson, Prilleltensky, Cooperrider, Dutton, Fredrickson, Schwartz, Vaillant and others of our Professors always set out their stall as available and benefiting all.  This is not easy.  As Caroline articulates so well achieving goals is hard work, takes grit and stamina; we make many mistakes on the way, always. Learning is the only way forward.  It matters.

It matters in Virginia. It matters in Iraq.  In Africa and Asia.  Can positive psychology furnish the mentalities that will save the planet?  In the millennium launch of Positive Psychology, this extraordinary paradigm shift not only for social science but for society, Marty Seligman and Mihály Csíkszentmihályi wrote:

“Entering a new millennium, we face an historical choice. Left alone on the pinnacle of economic and political leadership, the United States can continue to increase its material wealth while ignoring the human needs of its people and that of the rest of the planet. Such a course is likely to lead to increasing selfishness, alienation between the more and the less fortunate, and eventually to chaos and despair.

At this juncture the social and behavioral sciences can play an enormously important role.”

This is the mission to which we are engineers.

I have no insights to Virginia.  My taxi driver says “At least they shot the bastard.”  There are important issues of command and control and no doubt the inquiry will focus on these (because they seek a risk-free solution).  Yet my intuition is that those in control were perhaps disengaged, their intuition was not engaged, and crisis led to massacre.

I recall the Dunblane shootings in Scotland (16 primary children and one teacher shot dead).  Dunblane is one of the nicest villages in Scotland, a place where urban squalor is unimaginable.   I am very conscious also of Elliot Currie’s excellent book, The Road to Whatever: Middle-Class Culture and the Crisis of Adolescence:

“The new Darwinism is not only tough but also distinctly uncaring and irresponsible; under its sway, we have become a society that is often self-righteously hard on children but simultaneously unwilling to accept the responsibility of actually bringing them up.”

I am shocked and appalled by the massacre at Virginia.  We cannot eliminate risk nor eradicate crime and attempts at utopia generally cause more problems than they solve. Crises and tragedies rightly cause us to examine, internally as well as externally.  We are bound by sympathy as Adam Smith recognized so well, and as the low birth weights of European babies immediately after 9/11 testified.

A British journalist challenged Sachs plan for mosquito nets on the basis that the main problem was over population, which would presumably be made worse by protecting children.  The only route to smaller families, said Sachs with controlled anger, is for parents to have greater confidence that their children will live.  This is true for us all.

As engineers we have a heck of a lot of bridges to build.  We are building them.  Our science develops.  Our values, creating a better world, remain.

Currie, E. (2005). The Road to Whatever: Middle-Class Culture and the Crisis of Adolescence. Picador.

Angus: It is great to hear from you again. Thank you for your thoughtful piece. It reminded me of the big picture and grand potential of Positive Psychology. All the best, Doug

HI Angus!
Great to “hear” your voice again. Very thoughtful article, and thank you for many connections you make between tragedy and joy. Where I live, everyone knows someone who is either at VA Tech, or who will be going there next year, so the grief feels very pervasive here in Washington, DC. Many people have asked me if Positive Psychology could have prevented a tragedy like this from occurring, and I don’t know that answer, but I do know that teaching children how to be resilient, hopeful, optimistic, and more verbal about what they’re thinking can certainly offer hope. I pray that as Applied Positive Psychologists we can all help to increase “the tonnage of happiness in the world” so that some of these very sad occurrences can either be eliminated, or happen less often.

Hope to see you at a MAPP reunion one day!
Caroline

Thanks for writing on a timely topic. I clicked through to the BBC topics and am struck by the “fail before we try” thinking that characterizes some of it. One positive approach regards “social mobilization” and positive change. It made me think of Giselle’s work in microfinance and Positive Psychology. Small sums can add up! Increasing self-efficacy and well-being, as well as building optimism and resilience, are among the most worthwhile things we can do for the world. Thanks for writing!

Your piece touched off a thought that I have been having for the last few weeks. I wonder if we’re on the same wavelength. Or, perhaps the world is building a new wavelength…

From disparate arenas of the world, a new vision is NOT being created. It is a new MINDSET. This mindset I believe is housed well within positive psychology. The focus in the typical mind of man is on survival and hoarding because of “lack” mentality. The focus in PP is on growth, flourishing, and building community/relationships. We, as “engineers” must engineer the disbursement of this mindset to the world. We can only solve our problems by rising to a different mindset (and I would also say ‘heartset’) from which we created our problems. This is what these new economists, policy makers, and social scientists are doing. Helping the world to rise above… as Einstein put it…

“The significant problems we have cannot be solved at the same level of thinking with which we created them.”

‘perhaps the world is building a new wavelength’ – what a great thought Nick perhaps that is exactly what is happening. Have you come across Teilhard de Chardin – Hymn of the Universe?
I really like your idea of a new ‘heartset’. Carol Dweck’s work on ‘mindsets’ is terrific, opening doors and challenging much. But it is not just because I am a Scot that I so often find truth in David Hume’s argument that ‘reason is, and only ever should be, the servant of the passions’.
The 19th century – as democracy advanced – heard many cries of ‘we must educate our new masters’. The bahaviourist fallacy was to remove/neglect any notion of agency; Freud/Jung as they probed understanding also came up with analyses that suggested individual agency was overwhelmed by unconscious factors (which it doubtless often is). The lessons of the 20th century seem to have been that we need to learn how to manage our emotions, individually and collectively, if we want to survive. We have a lot to do but the corner has been turned.
And your idea of a ‘heart-set’ seems to me right on the mark.
Best wishes
Angus

I have not come across Hymn of the Universe, though I am picking it up from my library tomorrow (call # 231 TEILH).

I am also a student of Hume, and our reason is science. Our science is what we must use to convince the minds/reason of those that create policy. We must “engineer” a case of the gravity of a sorely needed new ‘heartset’ with the science of positive psychology (and other positive social sciences) and its impact on the health, welfare, and flourishing of not merely our individual cultures, but of humanity itself.

Frankly, this is all not just a “good thing or idea,” it is practical and pragmatic for the survival of our race in the long term.

Thanks for your ongoing thoughts Angus! 🙂
Nick