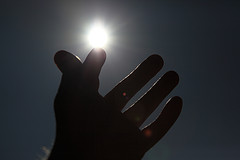 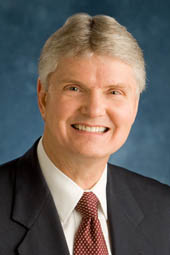 In August I wrote about Kim Cameron’s and Bradley Winn’s  Virtuous Organizations. Virtuousness—aggregates of virtues—involves collective displays of moral excellence by employees in organizations. It occurs through the combination of employee behaviors and organizational processes and routines. “Employees collectively behave in ways that are consistent with the best of the human condition and the highest aspirations of human kind.”

Lavine noted that very little had been done in applying the positive deviance approach to business settings, apart from the work of Gretchen Spreitzer and Scott Sonenshein. Nine years ago, these two researchers provided definitions, constructs, and future research agendas. They defined positive deviance as “intentional behaviors that depart from the norms of a referent group in honorable ways.”

In this month’s article, I provide a high-level summary of a different model of deviance: Kim Cameron’s Positive Deviance Continuum. This is not presented in the latest Oxford Handbook of Positive Organizational Scholarship, but appears in other publications including the original 2003 Positive Organizational Scholarship book. Cameron’s Positive Deviance Continuum is a framework created for organizations, but differs from the Positive Deviance approach that is the subject of Lavine’s chapter. Both ideas share a definition of positive deviance as an extreme aberration from normal behavior, but they diverge in many other respects.

Cameron explains that organizational virtuousness refers to behaviors that extend beyond what is normally expected. In the continuum, reproduced below, normality or healthy performance is at the mid-point. Positively deviant and negatively deviant performance are located at the polar extremes of the continuum. Negative and positive deviance are aberrations from normal functioning, problematic at one end and virtuous at the other. 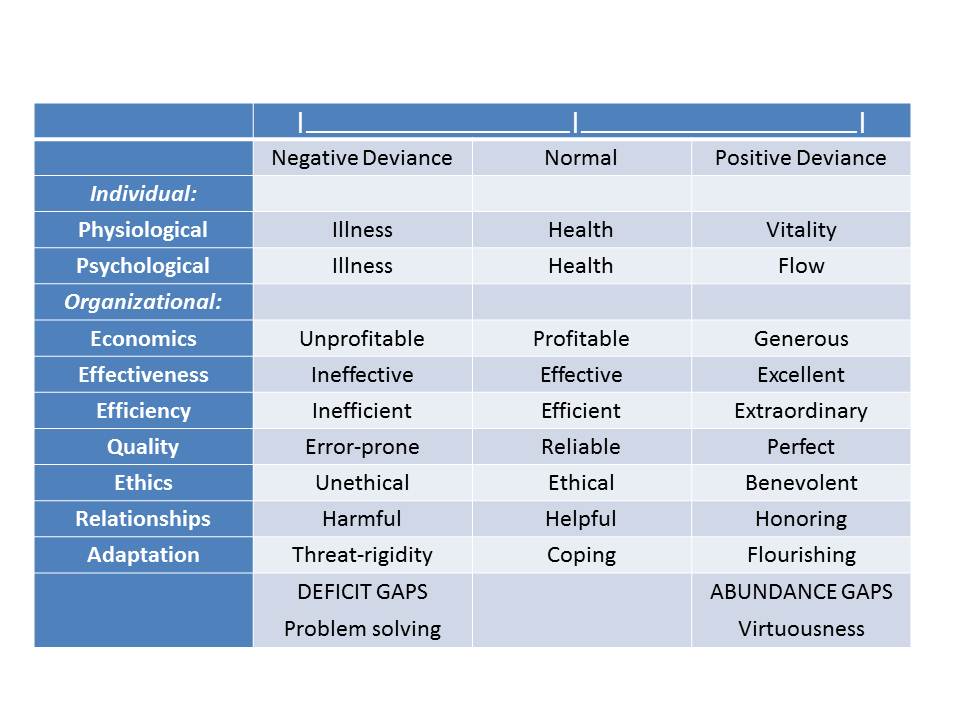 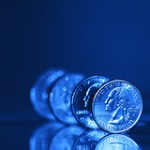 Balance Between Virtuous and Pragmatic Goals

“Hard,” objectively defined measures such as economics appear alongside more subjective, qualitative measures such as relationships.  All are important, as Cameron notes by reference to this comment by Jeffrey Schwartz, CEO of Timberland in 2002: “If we don’t make money, no amount of virtue will do our firm any good. Wall Street will ignore us, and we will soon be out of business. We must have bottom like performance for virtuousness in our firm to be taken seriously.” Cameron paraphrases that “the inherent goodness of virtuousness in organizations, in other words, is unlikely to capture attention without pragmatic outcomes.”

“Most leaders pay almost exclusive attention to the gap between what is going wrong: mistakes, poor performance, or illness and the middle point on the continuum, represented by an absence of illness, effective performance, or problem resolution. This gap might be labelled a ‘deficit gap’ or a ‘problem solving gap.’ A large majority of scientific research in fields such as medicine, psychology, and organizational studies focus on deficit gaps — i.e., addressing and overcoming problems. 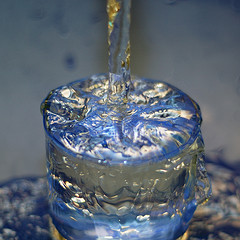 “On the other hand, the gap between the middle and the right side represents an ‘abundance gap’— the gap between successful performance and spectacular or extraordinarily positive performance. This gap receives far less attention in scientific research and in the attention of managers and leaders. The right side of the continuum implies that leaders in organizations not only focus on being profitable, effective, efficient, or reliable in performance (represented by the middle point in the continuum), but they also focus on being extraordinary, flawless, or benevolent. Their outcomes produce benefit for more than the organization itself, since a condition of abundance makes possible the success of others outside the organization as well.

“The abundance approach motivates change in organizations based on the pursuit of a greater good and an opportunity to achieve positively deviant results. The right side of the continuum represents a condition of virtuousness — that is, the highest human condition, or the best that human beings aspire to be. The pursuit of virtuousness supplements the pursuit of personal reward and problem solving.” (Kim Cameron, 2008)

When I show this continuum to clients, they agree with Cameron’s observations. My clients comment on how commonly their organizations spend more time avoiding or fixing the problems in the left-hand column, but do not direct nearly as much attention to creating the conditions described in the right-hand column. Their organizations are usually expected to perform (and do generally perform) at the mid-point.  Not all, or even many, leaders think about pushing beyond this

I asked Bridget Grenville-Cleave, another PPND author, who wrote yesterday’s book review on Happiness, Resilience and Motivation in Adolescents if she had anything to add on what organizations have to benefit from Kim Cameron’s Positive Deviance Continuum. She writes that:

“The Positive Deviance Continuum illustrates a fundamentally important point in that the very words we choose to describe our organizations can act as constraints: limiting us, inhibiting us, and closing down our options and aspirations. Or they can be inspirational: motivating us to search beyond the ‘ordinary’ and the ‘expected,’ and giving us the freedom to strive to be the very best that we can be.

“Often the way we describe what we want to achieve in an organization falls into the former category–and when this is the case, I think that the most we can hope to achieve is the mid-point on Kim Cameron’s Continuum because we cannot envisage or describe an organization which exists beyond that mid-point. As my old boss, Duncan, used to tell me from time to time, ‘You don’t know what you don’t know.’

“This helps to explain why the Appreciative Inquiry process is so powerful: it frees us up to go beyond what is ‘normal’ or ‘expected.’ It is also why learning and using the language of positive psychology generally, and the Positive Deviance Continuum specifically, is so important to organizational success.”

Cameron, K.S. (2003) The Deviance Continuum. University of Michigan. (shown above)

Amanda,
Thanks for peeling back Cameron’s Deviance Continuum. His attempt to include values in the continuum is admirable but especially because of his honesty about companies needing to prove the ROI on values to their shareholders. Do you know if Cameron has studied the comparative quarterly and year-end results of a company focused on negative deviance compared to one focused on positive deviance? My experience with financial service teams has shown that when they look for and find positive deviance they often find new revenue streams. But I’ve not implemented or seen this on a company-wide basis yet. That would be interesting to see. Perhaps one of your other readers have seen this practice implemented.
Thanks for the article.
Scott

Sorry for taking some time to reply. I asked Kim Cameron to help, and he replied
“I am more and more convinced that we have found something important in predicting and enhancing performance. Whereas I have not conducted a study comparing organizations that focus on “negative deviance” compared to those that focus on “positive deviance,” the analyses in our last couple of papers do compare companies who score the highest in positive or virtuous practices compared to those that score the lowest. This latter group may or may not be focused on negative deviance, but they are certainly not focusing on positive deviance. The differences are dramatic in terms of at least six outcomes: profitability, productivity, quality, innovation, customer satisfaction, and employee engagement.” (Kim Cameron, October 2012)

I hope that helps
Amanda

Amanda,
Thanks for following up. I suspected these kind of results and I agree with Kim that Positive Deviance might be a very good way of increasing all of the factors he listed. Thanks again for a very thoughtful article.
Scott