Alex Sternick, BSc.in Clinical Nutrition, is an expert and internationally recognized practitioner of the Art of Nonsense and Laughter Therapy. He is the man behind laughter yoga clubs in Israel. Alex began his laughter journey in India in 2003, where he worked with terminally ill patients. Then he practiced in Ethiopia as a laughter therapist in Mother’s Mission and a nutritionist with SaveTheChildren USA.

These experiences inspired him to bring laughter yoga to Israel. In 2004, he started the first laughter club in Jerusalem and brought the leading experts to the country, including Dr. Madan Kataria and World Laughter Master Belachew Girma to run workshops. Alex has also worked with Israelis and Arabs in an attempt to bring these diverse groups together through laughter and nonsense.

In addition to his impact in his native country of Israel, Alex has traveled all over the world to run professional certified training workshops. He has trained professionals in his techniques in countries including Germany, France, Italy, Japan, USA, Austria, Finland, The UK, Slovenia. He also appeared in local media channels in those countries.

Alex is a humor coach practicing and experimenting with Non-Linear Interventions&Approaches focusing mainly on building the capacity of self-acceptance within the individual. He evokes his protagonists and students to apply improvisational skills used on the stage to their real lives. His work is strongly inspired by the audacious teachings of Dr Viktor Frankl, Keith Johnstone and Frank Farrely.

Alex is currently the Gibberish Professor of the MsC. in Applied Positive Psychology program at New Bucks University in the UK.
In 2014 he was granted with the GOLDEN LAUGHTER AWARD by the French School of Happiness & Rigology® for his contribution of pursuing peace through laughter among Jews, Palestinians, and Jordanians. 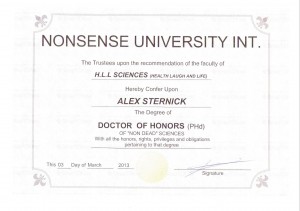 Sternick, A. (2018). Acknowledge and exaggerate your seriousness towards self humor-Art of Nonsense Switzerland 01.18. Youtube video.

Sternick, A. (2018). The WHY behind the game IGOR\BORIS-done in Gibberish-PLAYING WITH NONSENSE MasterClass- Suisse 01.18

Nelson Mandela: A Life and Legacy of Strengths